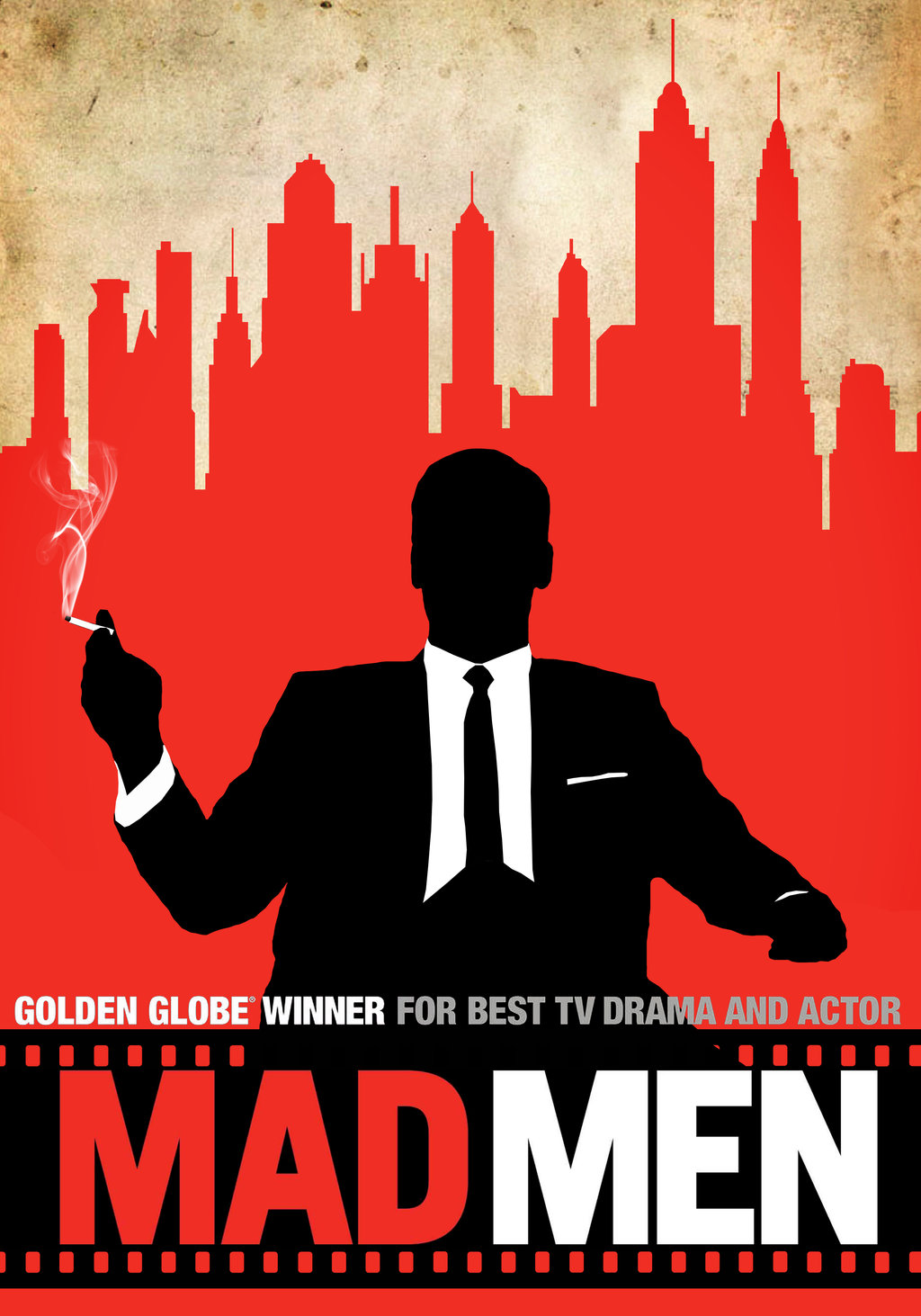 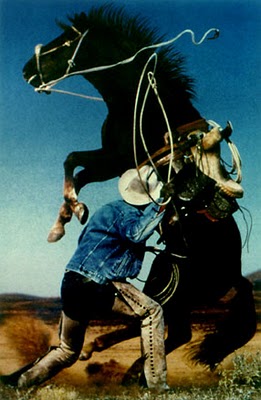 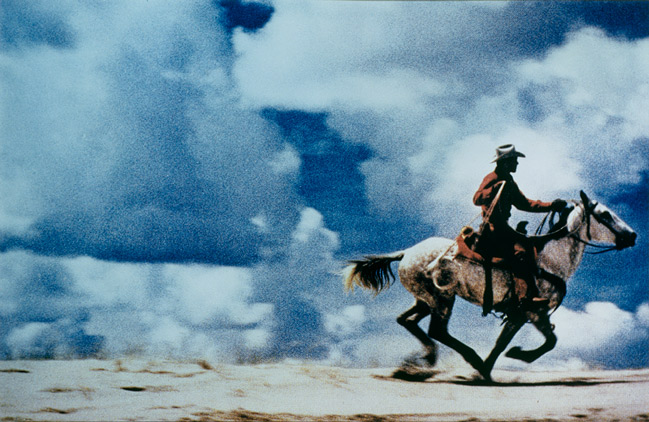 Here we can tell how Prince cut out an excerpt of an advertisement for Marlboro – the logo, slogan and health warning is removed. With that he has rendered the photo his own art – if that is possible?

«Advertising is based on one thing, happiness,» says Don Draper, the main character in the TV-series Mad Men. A tough cowboy and his horse had the ultimate good fortune in the USA in the Sixties. 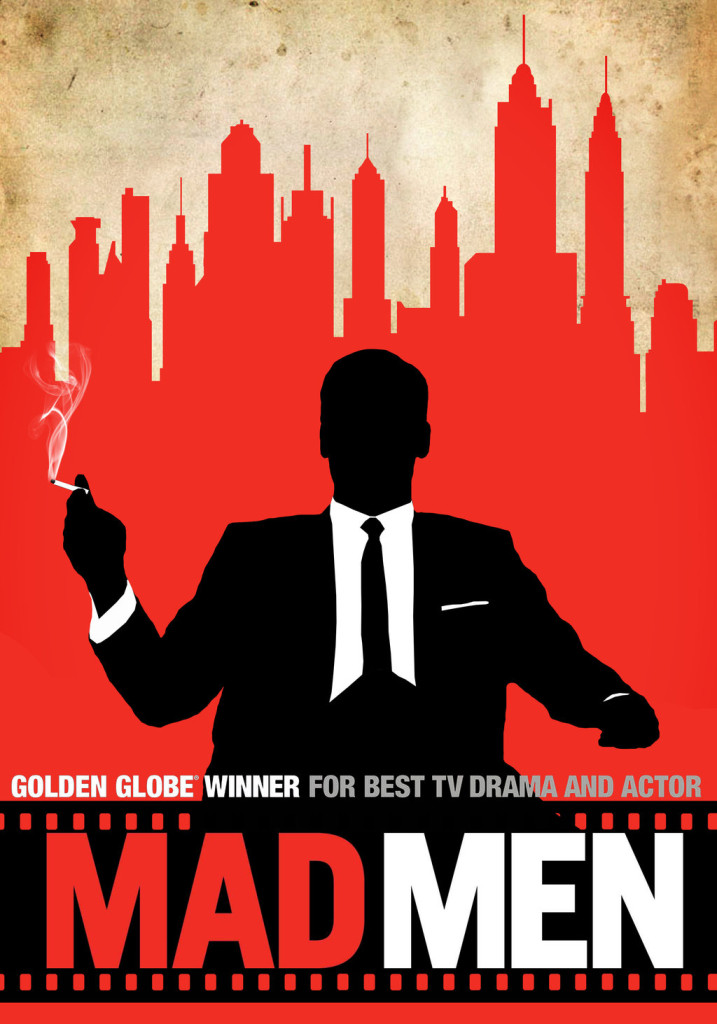 Marlboro Country
The Marlboro Man was moulded quickly. Tough models pictured in desolated scenery, dressed in leather or jeans and always with a cigarette in the corner of their mouths. The cameramen used capable horse riders – accustomed to doing stunts and rodeos – which felt safe and at home in the saddle. The Marlboro Men went riding in all seasons. They herded cattle and galloped around in a recognizable American landscape called «the Marlboro Country». Always smoking. «Taste the Flavour and Come to Marlboro Country», the message said. Gradually the trademark product became so strong that the slogan was removed and merely the pack of cigarettes remained in the advertisement. Everybody understood what the campaign was promoting.

Where did the idea come from – to promote cigarettes with cowboys?

During the first part of the twentieth century nobody talked about the hazards of smoking, but this changed in the middle of the century. Around 1950 physicians presented medical evidence of the causality between smoking and cancer. The producers of tobacco responded with the introduction of a cigarette with filter, which allegedly would remove the harmful effects from the tar and nicotine. In reality the filter was a sales gimmick because the smokers inhaled less nicotine with each breath – and ended up lighting more cigarettes to mask the nicotine craving. The filter was considered to be feminine, and even though Marlboro was marketed as a smoke for the female from the Twenties on, the need to think outside the box was apparent. To expand the range of customers, a new advertising campaign was launched, to appeal to both men and women – who could fit better than a cowboy as the central character? 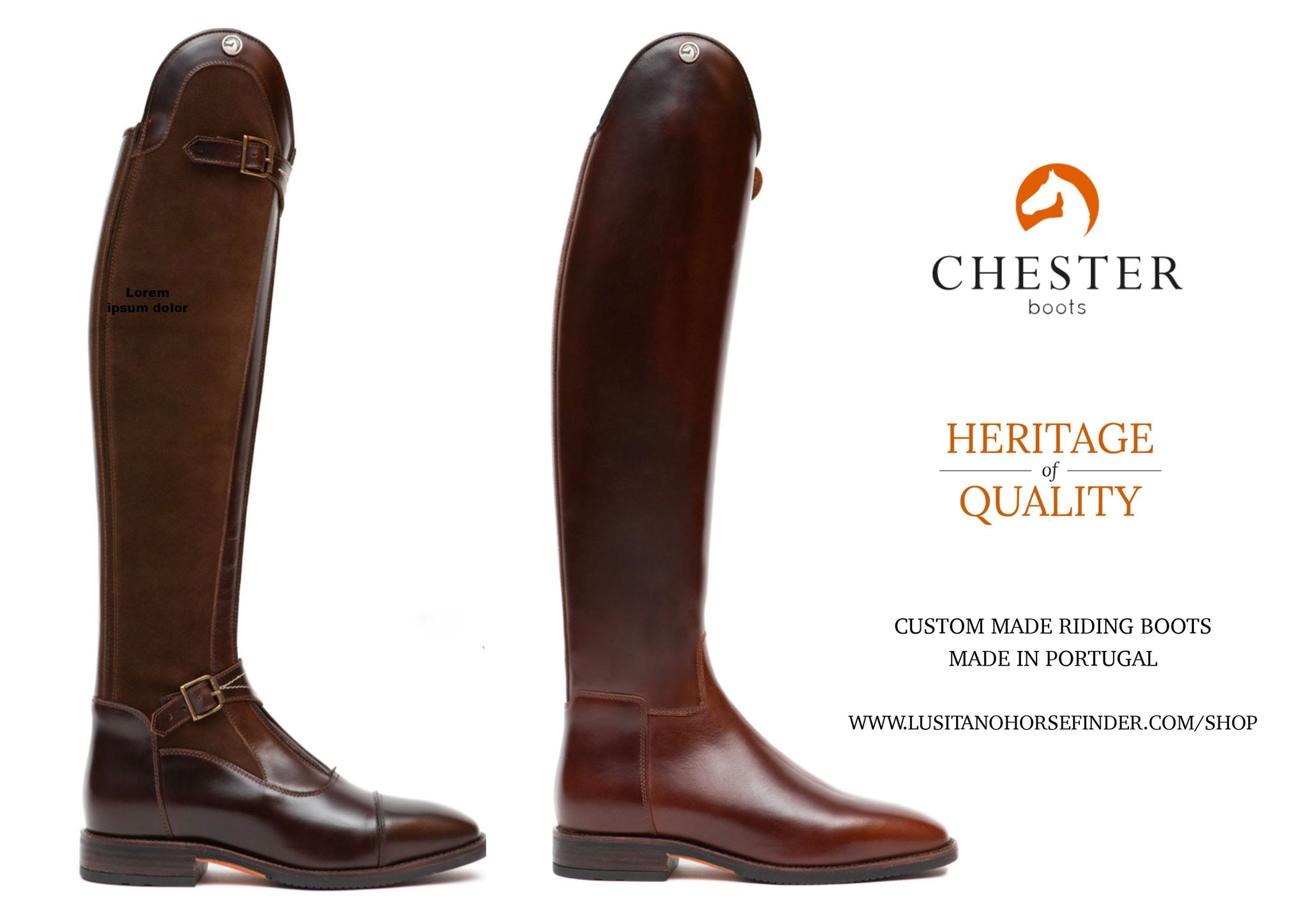 A Powerful Symbol
The cowboy is tough, works outdoors in all kinds of weather and is a masculine icon. Few other symbols are stronger to illustrate the individualist that can manage on one’s own in the nature. The cowboy is a specific American symbol. He is a lone, male hero dominating his surroundings. The cowboy is in a way the heir of the knights and stands as a sex symbol for women. This way the cowboy could reach both men and women. A good advertisement ought to be «simple, but efficient,» Don Draper says in the TV-series. Just like the Marlboro Man does. The advertisements of Marlboro are considered the greatest success in the history of advertising. As of today Marlboro is the best-selling brand of cigarettes. On account of the proven deadly effects of the cigarettes, the sales numbers have declined vigorously in the last thirty years although the sales increase in the South, especially in China. The Marlboro adverts came in the spotlight when it was known that four of the most famous models died of smoke related illnesses. Two of them turned against Philip Morris and criticized the producers for promoting smoking, just before they died of lung cancer.

A New Life for the Advertisement
Is it possible to earn over 3 million dollars by photographing an advert in a magazine and then sell it as art? Yes, the American artist, Richard Prince, has proven this. In the Eighties he shot a very famous line of photos of the Marlboro advertisements, which today is bought up and displayed, in worlds’ biggest art museums, included our own contemporary art museum Astrup Fearnley Museum of Modern Art in Oslo. In 2007 one of Prince’s photos, a 2.5m high photograph of a cowboy in sunset was sold at the auction house Sotheby’s for 3.4 million dollars.Richard Prince worked in the clip art department at Time Life magazine. «At the end of the day the advert photos was what I had left and they became my motives» reports Prince about how he approached his subject. He took photographs of the advertisements. Many photos. He liked the Marlboro advertisements especially. He cut a section of the advert so the text didn’t show and with that the reference to the cigarettes was gone. The photos appear to be Prince’s own but everybody knows they are from a Marlboro advert. Soon they get very popular and one of Prince’s cowboy pictures becomes the first photography to be sold for over a million dollars.

Art or Theft?
Prince’s photos are copies (photographs) of a copy (the advert) of a myth (the cowboy). He has been criticized for stealing the Marlboro photos while experts call it art. The technique is called appropriation. That is to use or copy existing material, for instance photographs or objects, into one’s own art. This is far from the first time artists do this. In the Sixties the foremost representative of the poparts’, Andy Warhol, used advertisements in his own paintings and prints, for example with the pictures of Campbell’s Soup to comment on the consumer society. In the 1980s the technique reached an all time high with postmodernism and a number of artists, among others Richard Prince, explored the Marlboro-series and how they shape our understanding of the world. Perhaps Prince wanted people to reflect over how companies used American symbols to sell harmful merchandise? 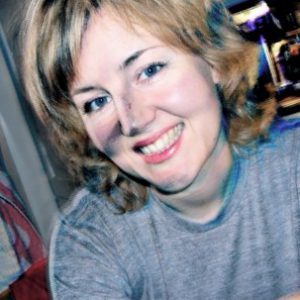 Ane has a long fascination for horses, history and traveling. Her interest in horses led her to Spain for a riding weekend in Jerez de la Frontera. She ended up, however, to settle down there for a year, riding and learning to love the Spanish horse culture. She is an historian, textbook writer and works as a teacher in the farmland of Norway. Her interest in horses, history and culture fullfill EQUILIFE ́s vision of being a broad lifestyle magazine.

Drew Doggett: The Spirit of Sable

Inspiration for the New West 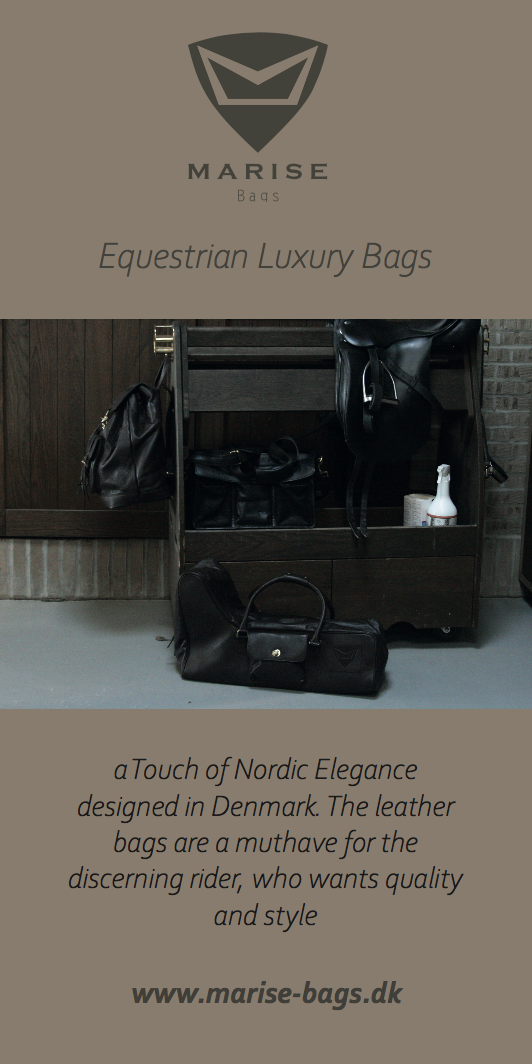